We sent two teams to the tournament - one team lifted the trophy (please see photo) after beating our other team in the semi-final.

On 9 February the Warriors and the Spartans (our Year 5 teams) went to Egham to play in ERPSSA tournament.

The Spartans played 6 matches: they drew 0-0 with Holy Family and beat St Paul’s 4-2.  They now qualified for the quarter finals and beat Cobham 1-0 in extra time with a goal from outside the box.  This meant they could play the Warriors to see who played St Jude’s in the final.

Meanwhile on the Warriors side of things they first played St Charles and beat them 1-0.  Then they beat St Jude’s 2-0 and Ongar 2-0.  So the Warriors had won their group stage and qualified for the semi-finals.

In the semi-finals the Spartans and the Warriors played each other!  The Warriors won 2-0.  In the final they played St Jude’s and match ended in a 0-0 draw.  It then went to penalties and Cardinal Newman won 2-0 – so we won the final!

On Friday 15 April Cardinal Newman Year 5 played against St James.  We played very well with a huge victory, 9-1.  Harry set us on the road to victory scoring an amazing header.  Adam amazed us all by scoring 6 goals!  During the first half we dominated possession and put ourselves in a convincing lead of 6-0.  Joseph is a superb goalkeeper with a 100% record for the team.  Edward, our other goalkeeper also played and made two very important saves.  Ben finished off the ame with 2 goals.  Our team played brilliantly and we were delighted to win.

Report by Adam C and Harry 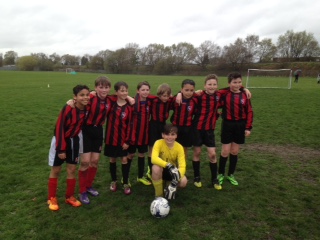